Why Most CXOs Will Never Make It To CEO And What They Can Do About It?

Why Most CXOs Will Never Make It To CEO And What They Can Do About It?

Kevin1 was a brilliant finance executive. After doing a few years in an accountancy practice he had joined a company in its finance department and steadily risen in rank over the years to become its Chief Finance Officer. The board trusted his numbers as well as his prudent judgment. Yet, when third time in five years Kevin was overlooked for promotion to the role of CEO of his company he shared his frustration with me. He has worked the board, and knew each of the members, even the new ones, well enough to regarded as a reliable ‘colleague’. They knew that he would not mind taking up the challenge and were also aware that two of their last three choices did not turn out to be that brilliant. Yet they were reluctant to hand over the mantle to him. He had already proven his case by his excellent leadership of the finance function as well as his strategic thought process. What else did he need to do to prove to the board the most obvious thing – that they were ignoring the best candidate for the job. We started discussing perceptions and his indispensability as the CFO, but soon we got past that discussion and started drawing figures on paper napkins. It was clear that he had a great coverage of the entire length and breadth of the finance function as we went through the pyramid that later turned into figure 1 below.

Whether it was funding, or budgeting, or financial control or treasury management he had made his mark on the business. He was proud that the auditors, investment bankers as well as the commercial bankers were all very complimentary of his accomplishments. Despite knowing all this, the board would not give him the final nod. As the discussion meandered from the finance function to the CEO’s role another figure on the paper napkin illustrated the conundrum. This figure was later turned into figure 2 after a few revisions. As I discussed my experience from shipboard command that most captains had to rely a lot on the chief engineer and hence seemed to favour chief engineers over chief officers. After all they had been chief officers themselves and could do the role themselves, if they ever had to. But, despite all their engineering knowledge, most captains could never replicate the knowledge base of a chief engineer. Most successful captains were those who seemed to get the best co-operation from the chief engineers and knew how to get it. A modern organisation is far more complex than the shipboard company. Reporting to a CEO is a complement of 5-10 people and each of them is a potential candidate for the role. It appeared in Kevins case that, whether by design or not, the board preferred an executive for the CEO role who could integrate the gaps between the various points of views and get the best performance out of the entire team. Just by law of numbers there are between 5-10 internal candidates, in addition to all the external potential hires, for each role of CEO. While many of them may not be serious contenders, there are still enough contenders to make each race an interesting contest. 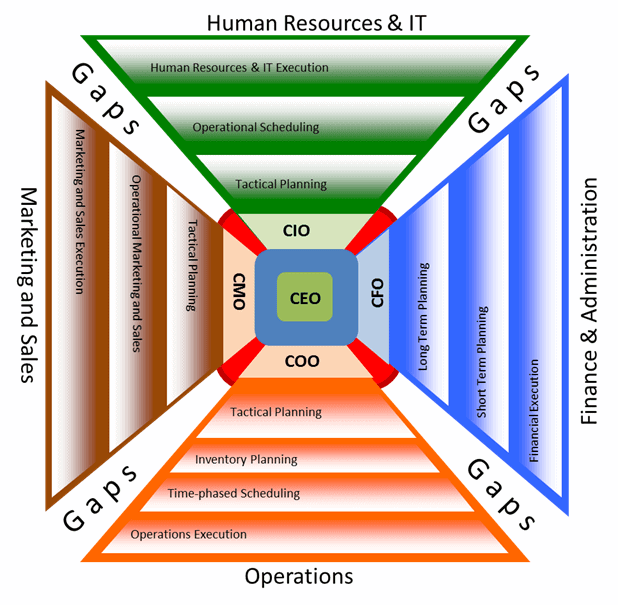 While each contender with a real chance is exceptionally good at the functional area they come from – whether it is sales, or marketing, or finance or operations – the one that can integrate the entire team and engender a unique shared vision of future, that the board can buy into, generally get the nod. Inevitably, as shown in figure 2, there are gaps between the functional areas. There are also parts of the functional areas that outsourced to third parties – whether in logistics, or IT or marketing or other areas. Integrating these external parties into the organisation’s fabric in such a way that they start sharing organisation’s vision and functioning as a responsible part of the team is even more difficult. In my view Chief Executives of future will distinguish themselves on this capability – to integrate useful outsiders into the organisation’s fabric, to outsource strategically, to build a business network of mutually dependent entities and to get this network working in unison towards the shared vision.

So, what can you do about it?

To become a successful CEO in future, strategic thinking will not be enough. An ability to create a vision of the future, will not be sufficient either. Going beyond that, you will need to be able to engender that shared vision throughout the organisation, know how to bridge the inevitable functional gaps, identify the key external parties that are useful to your vision and bring them into your organisations’ business network and make them a productive part of this network. I discuss more about business networks in my book ‘The 5-STAR Business Networks’ and a free download of the first three chapters is available from this link. Notes: